Getting Lost in Paris, An Adventure of a Lifetime!

If you’ve never walked the streets of Paris, you are missing out on the experience of a lifetime. The City of Lights draws thousands of tourists every month who say they will return once again to this beautiful and enchanting city.

The street side cafes, the smell of fresh croissants, the wine, cheeses and cuisine, the Cathedral of Notre Dame, the Eiffel Tower, the Louvre and hundreds of fine art museums, combined with the Parisian music and people all add to the allure to the City of Lights. Just listening to Parisians talking amongst themselves in cafes makes you appreciate how captivating this city and its people truly are. 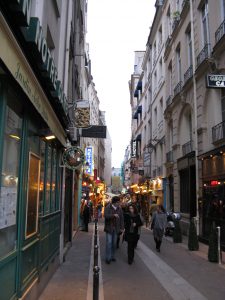 The best way to experience Paris is by strolling the streets. It’s hard to get lost in Paris, and if you do, it’s an adventure finding your way back. There are 20 different neighborhoods called arrondissements, and every single street sign in the entire city tells you which one you are in. If you remember the arrondissement where you are staying, it’s easy to find your way back to the hotel. The city’s arrondissements are arranged in the shape of a counterclockwise snail. You can find the 1st arrondissement on a map and count to 20, moving your finger in a counterclockwise, circular motion.

Most of the tourist attractions can be found in the first eight arrondissements, but there’s much to see in all the beautiful neighborhoods and areas of Paris. Damon’s Getaways will book your air, hotel and even tours allowing you to relax and enjoy all this city has to offer. Below we detail some of the highlights of this beautiful city and what arrondissement they are located in.

The 1st And 2nd Arrondissements of Paris

Located in the first and second arrondissement, you’ll want to take a tour of the world-famous Louvre, where the Mona Lisa can be seen along with thousands of priceless works of art. The glass pyramid building itself is a sight to see and appreciate. Near the Louvre you can also tour the Tuileries Gardens, an Italian-style garden that is filled with dramatic statuary and perfectly symmetrical shrubbery, reflecting the Renaissance period.

The 3rd And 4th Arrondissements of Paris 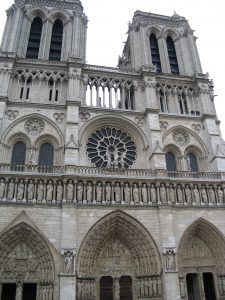 For a taste of medieval Paris, you’ll want to visit the Marais, whose very name means “marsh” because of the silty ground it was built on. It was the neighborhood of choice for French aristocracy from the 13th to the 17th centuries. Found in the center of Paris in the 3rd and 4th Arrondissements, it’s once again one of the trendiest neighborhoods in Paris. If you are a Picasso fan, you’ll want to visit the Picasso Museum in the 3rd Arrondissement. And you won’t want to miss the iconic Cathedral of Notre Dame located in 4th Arrondissement. The Notre Dame Cathedral is a 12th Century Gothic cathedral with sculptures and stained-glass windows. It was one of the very first Gothic cathedrals built in France taking over 300 years to complete.

The 5th Arrondissement of Paris

You’ll also want to visit the Latin Quarter located in the 5th Arrondissement. It has a flavor all its own with it’s narrow, winding, cobblestone streets harkening you back to medieval Paris when the original scholars of the famous Sorbonne University roamed the streets speaking Latin. The Paris Pantheon is also located in this Arrondissement. The Pantheon building project began in the 1740s as a church built to honor Saint Genevieve by King Louis XV. In 1791, however, as part of the ongoing French Revolution, it was declared that the building would become a shrine to the war heroes of France. The church building was built in the form of a massive Greek cross, featuring Corinthian columns, and massive domes held up by hidden flying buttresses.

The 6th Arrondissement of Paris 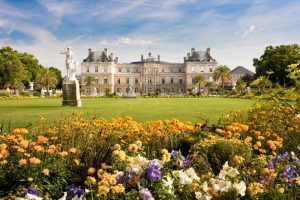 The 6th Arrondissement is in the heart of Paris’ Rive Gauche, or Left Bank, which comprises Paris’ most charming streets, lined with quaint shops, patisseries, bakeries, wine shops, and cafés, making the neighborhood an absolute must for food lovers, shoppers, and coffee drinkers. What better way to experience the traditional intellectual and literary heart of Paris than by visiting one of the famous cafés of St-Germain-des-Prés? In this arrondissement, you will also find the beautiful and peaceful Luxembourg Gardens, which are designed in the formal French style featuring broad avenues lined with beautifully manicured trees and trimmed hedges, immaculate lawns, statues, and fountains.

The 7th Arrondissement of Paris

Then, of course, there is the Eiffel Tower located along the Seine River in the 7th Arrondissement. Although the tower can be seen almost everywhere in the city, you can visit the site and even dine in the tower. Reservations for dining is highly recommended. The tower was built for the 1889 World’s Fair to mark the date of the 100th anniversary of the French Revolution. The first digging work started in 1887. It was completed in record time – 2 years, 2 months and 5 days, which was 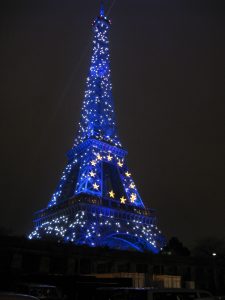 a veritable technical feat at that time. The tower is over 1,000 feet high at its tip. You’ll also want to make sure you catch the tower at night for the hourly light show after sunset. The light show began in 1999 to ring in the new millennium and has been going on ever since. Also, located in the 7th Arrondissement is one of the world’s most-visited museums, the Musée d’Orsay which houses the largest collection of paintings, sculpture, and decorative objects produced between 1848-1914, showcasing many of the most remarkable works of the early modern era.

The 8th Arrondissement of Paris

Located within the 8th Arrondissement is Paris’ premier shopping area – the Avenue des Champs Elysées. One of the world’s most-visited avenues, it is lined with restaurants, luxury boutiques, flagship stores, and nightclubs. It is also the setting each year for major events such as the Bastille Day military parade, the arrival of the Tour de France and the Christmas lights. The Avenue des Champs-Elysées also has some of the top museums in Paris: the Grand Palais, the Petit Palais, the Palais de la Découverte and the Espace Culturel Louis Vuitton. You can also climb to the top of the Arc de Triomphe for a spectacular view of Paris!

The Art District of Montmartre in the 18th Arrondissement!

You can’t visit Paris without visiting the18th arrondissement, where the charming hilltop Montmartre district a former artists’ village once inhabited by Picasso and Dalí, and home to the domed Sacré-Cœur Basilica. There are sweeping views of the city from its steep, winding streets, while the iconic Moulin Rouge cabaret below draws tourists and nightclubbers. The streets are still lined with artists trying to make a living where you can purchase their artwork. There are also bars and eateries located in and around the area.

Hop Aboard A Seine River Cruise To See Paris By Water 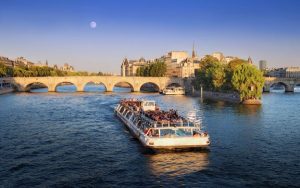 Meandering through the center of the City of Lights is the beautiful Seine River where you can take a day or night cruise that includes Parisian music and delightful foods should you choose a dinner or lunch cruise. Several tour operators offer several options to see Paris by boat. And this really is a must do when visiting Paris.

Take a Side Trip to Versailles!

If you have time for a side trip, it is highly recommended you visit the Palace and Gardens of Versailles, which has been listed as a World Heritage Site for 30 years. It was the royal residence for the French monarchy until the French Revolution in 1789. In 1837, it became the Museum of the History of France. The rooms of the Palace were then devoted to housing new collections of paintings and sculptures representing great figures and important events that had marked the history of France. It’s just over an hour from Paris, and several tour operators are available to take you there.

Schedule a Paris vacation with Damon’s Getaways today. You can stay over a weekend or book an entire week or more. Call us for details!